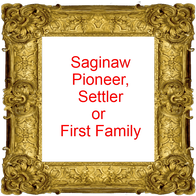 Below are the Guidelines and Instructions to use in filling out the forms necessary for applying for and in documenting the proof of your ancestors.
Eligibility:
To qualify for a 'Pioneer, Settler or First Family' Certificate, an applicant must be directly
descended from an ancestor who settled in
​Saginaw County
You do not need to be a resident of Saginaw County to apply

LEVELS OF CERTIFICATION : GOLD (Pioneer) SILVER (Settler) BLUE (First family)
• Pioneers (prior to 1822) Gold Certificate
Saginaw county is a Trading post/ first fort built
The first recorded European visitor was
Father Henri Nouvel in 1675, a Jesuit Priest from St. Ignace.
From 1675 to 1819, the original residents of the Saginaw area consisted of the
​Sauk and Chippewa Indian tribes, as well as European fur trappers and traders.
In 1819, a permanent settlement was established, and families began to arrive,
1819 also saw the treaty of Saginaw signed. It was three years later,
in 1822, that Fort Saginaw was established.
​The county was created on September 10, 1822.
​
​
• Settlers (1823 to 1835) Silver Certificate
Saginaw County created & organized
In 1824 Saginaw territory was organized and then
attached to Oakland County
for judicial purposes.
​Saginaw Township was organized in 1830.
​A January 28, 1835 act, organized Saginaw County
(which then included Bay County) as an official county.
​
• First Families (1836 to 1884) Blue Certificate
Timber Boom Era
1837 saw the first School district in Saginaw county.
It was located on Court Street, near the courthouse,
which itself was built in 1839.
In 1845, German Lutherans from Franconia,
of the Kingdom of Bavaria, came to settle here.
One of the missions became Frankenmuth.
In 1850 Norman Little built a plank road from Flint to Saginaw.
In February 1859, Saginaw was finally chartered as a city.
The Saginaw County population in 1850 was 2,609.
34 years later, after the timber boom, the 1884 census
recorded a whopping 75,813 people!​​
INSTRUCTIONS FOR FILLING OUT THE PAPERWORK

Download File
FAMILY GROUP FILE FOR EACH FAMILY (file #1), AND FOR LARGER FAMILIES WITH MORE CHILDREN (files #  2 & 3 )
BACK TO TOP OF PAGE
CREATED BY K_WEB
​MAINTAINED BY LIBRASTAR
Powered by weebly.com