DEAR MISS BETTY
I am a descendant of Charles C Hurd
and I am looking for the following information:
info on my G Grandfather : Charles C (or Cyrus) Hurd
DOB about May ? 1868
DOD about 1920-21
Died at the poor farm in Saginaw
I am looking for the following information on him:
1. Name of wife
2. Where Charles C Hurd is buried
3. Correct dates of death and birth
His son was Charles W Hurd,
(may also have been at poor farm, not sure)
Sincerely,
Joseph Hurd

Hello,
My name is Sandra and I am starting to search my family tree.
I have run into a slight road block. My grandfather was in the
St. Vincent's Orphanage in Saginaw in the mid 1900's.
I am wondering if there are any records of him being there?
Or maybe, you can point me in the right direction where I need to research.

His last name was Unger. He was born in Saginaw, MI to
F.A. Unger and Rosa (Schultz) Unger. I am not positive on his first name,
it could be Walter or August.  My grandfather did not like to talk about his childhood.
The only information I have was given verbally to me by him and he has since passed away.
He told me he was put in the orphanage at a young age and Edward Carson from
Harbor Beach, MI came and got him and gave him the name of Walter Carson.
I do have a birth certificate, although my grandfather told me it was his brother's birth certificate.
The name on the birth certificate is August F. Unger, birth date of 6-22-1907.
My grandfather's army papers give a birth date of 1-22-1905.
My mother (who also has passed) told me my grandfather had a brother,
( possible two)  and a sister. I have no information on his siblings.
I appreciate any information that you could provide me.
Thank-you,
Sandra


Dear Sandra,
After some searching online and asking here and there,
it was determined that the records were at one time,
in the possession of the Saginaw Genealogical Society,
and then they were requested to have the records returned back
to the St Vincent's Orphanage. We were not able to copy any of the documents.
But what I did find was that the father, one F.A. Unger was Fred A. Unger
and his SECOND wife Rosa were living in Saginaw, Michigan in 1910 with their four children,
Kate, Walter, Fred Jr and Mitchel. And sometime before 1920 their children are
ending up in orphanages and Homes for Training of youth. I can find no other documents
for him or his wife so far, neither death records or cemetery records,
if so, they may have been buried in a paupers grave, if there was no family to pay for it.
There is another piece of information that is interesting. In 1910 they had another DAUGHTER
living with them, age 17 by the name of Agnes. Here is the information we have found:

This 17 yr old ‘daughter’ was living with them,
it says her mother was from Michigan, and in Fred's information
it says this was his second marriage (M2) So first wife is deceased.
The mother is found in 1900 census in Garfield, Bay county, Michigan
Her name was Mary Fred and Mary had 6 children :
Agnes               DOB 1893
Erny (Ernst)      DOB 1895
Florence           DOB 1896
Ula (Julia)         DOB 1897
Herman             DOB 1898
Ludvic (Ludwig) DOB 1899
The second marriage is performed in 1902, so Mary must have died shortly after
the baby was born, but after the census, sometime in 1900-1901
A common thing that happened to women in the past. I could not find a death certificate on Mary.
But in 1910 Florence, Julia, Herman and Ludwig are all living with an Aunt and Uncle
(Ernstine and William Winter) in Sebewaing, Michigan. The Winters were not able to have any children.
I have reason to believe that Ernstine is the sister of Mary, and that the maiden name was Matzke.
Possibly from Frankenmuth.
Children of Fred and Rosa were:
Kate            DOB 1904
Walter         DOB 1905 Jan 22
Fred A Jr     DOB 1907 Jun 22
Mitchel        DOB 1909
Fred Sr. was a carpenter, and he owned his home in 1910. On Genesee Ave in Saginaw, Michigan,
He was able bodied and working at the time.So it was curious that both parents die together
in such a short amount of time. So we looked at epidemics that happened between 1910 and 1920
in the Saginaw area. In 1918 the influenza epidemic strikes the country and much of the world,
killing 3,814 in Detroit. Bay City lost 300. The Spanish flu pandemic of 1918, the deadliest in history,
infected an estimated 500 million people worldwide—about one-third of the planet's population--
including some 675,000 Americans.   World War I claimed an estimated 16 million lives.
The Spanish influenza epidemic that swept the world in 1918-19 killed an estimated 50 million people.
Within months of its outbreak, it had killed more people than any other illness in recorded history,
according to the U.S. Department of Health and Human Services. Most likely, they died from the influenza epidemic.
Without family to care for the children it is very likely that this is why they were all placed for either adoption or for work training.
No info found on Kate
Walter Unger- no information found
Frederick Unger (Fred A Jr)  DOB 1907 Jun 22, Possibly Frederick August Unger Jr (see document info below)
No info found on Mitchel

The records on adoptions are at St Vincent's Home,
now under jurisdiction of Holy Cross Children's Services.
They can be reached at:
989-781-2780  925 N River Rd Saginaw, MI 48906
Good luck in your search. We hope this has been of some help to you.
attached are the documents that were printed out in our research.

Dear Miss Betty,
I am searching for information on the Vereb family and specifically I need a copy of
either the Naturalization or Declaration of Intent for a Frank Vereb.
DOB 8/23/1897 PLACE: Czechoslovakia
I have looked everywhere online and cannot find this document.
Thank you!
Debra


Dear Debra
With the help of librarian Stacy I found this DECLARATION OF INTENTION
(which is the document filled out prior to the actual Naturalization record is completed),
at Hoyt library. Hope it’s what you need. See, we can’t find everything online.
​We have one of the best research libraries  in Michigan!  Hooray for Hoyt and their staff :-) 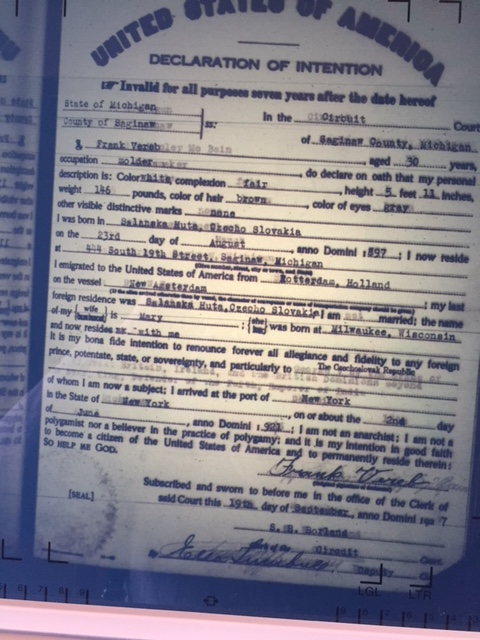 Dear Betty,
I had an interesting question this summer come up.
Someone's family had three children and a "plus one."
Is there such a term when researching DNA and what does it mean?
I think I might know, but wanted to make sure.
Thank you so much,
Kaki

Dear Kaki,
It can mean a couple of  things depending on what you are researching:
1.
Ahnentafel: Genealogical Numbering System - ThoughtCo
https://www.thoughtco.com › ... › History & Culture › Genealogy › Tips & Tutorials
From a German word meaning "ancestor table," an ahnentafel is an ancestor based genealogy numbering system. ...
Ahnentafel charts use a standard numbering scheme which makes it easy to see—at a glance--
how a specific ancestor is related to the root individual, as well as ... The mother's number is double, plus one.

2.
No X Matches - What does it mean? - Family Tree DNA Forumsforums.familytreedna.com/showthread.php?t=35856
Sep 22, 2014 - For a male, the X is only one chromosome out of a total of 45 chromosomes that are tested in FF
(22 pairs plus one X). If your 80 pages of family finder matches were phased as well as a male's X,
​you might lose a lot of these autosomal matches too because of false positive identical-by-state matches.

Happy Researching,
Miss Betty
HOPPS
9/2/17
Dear Miss Betty
Thank you so much for the copy of the clipping, it was information that I didn't have before.
I do have the death certificate, a letter and a telegram sent to my great grandmother here in Ontario.
The article mentions a girl in Bay City. I highly suspect her name may have been Nellie Baxter.
We think she was his Adam Hopps American wife. He was the captain of a tugboat called the
Miseford that maybe would have come in to Bay City on occasion.

If you come across anything else, I sure would appreciate it.  I've often wondered if it was possible
to get old police records. I wish I had been able to do the research myself when I lived in Michigan
​but I had to come back to Canada after the death of my husband in 2011 and I haven't been able to get back.
Thanks again,
Tina


Dear Tina,
I was able to find an article for your great grandfather Adam Hopps.
​You may already have the death certificate but I am attaching it also.
​If I run across any other material I will send it to you also. Hope this helps your research.

Thank you very much for the Ellen Welch Tyrrell obituary.
That completes the list of existing documents for the research I am doing on this family...
unless, of course, something unexpected turns up.

A friend's mother knows of my love for genealogy and asked me
if I would like to research this family.
Her father's mother (Ellie) was a daughter of James and Ellen Tyrrell.
Ellie died quite young and the family knows nothing of the Tyrrells.
I will be thrilled to present to the family what WE have found.
Again, thank you.
BURGER

Attached are files on my Burger family members with all the information I have on them.
Ernst Burger is buried in Brady Hill. He was single.  My 3X grandparents, Andrew and Catherine are a wall.
Please let me know if you can help.  I will be in Saginaw on June 6 or 7.
Thank you for your assistance.


Dear Tom
Would you believe these people were in Chesaning?!  We have scanned the Burger file.
But I think it is dead end. I do not see  Andrew and Catherine.
I am going out to scan again tomorrow in Chesaning at the Library ~ I will do some searching.
​
Miss Betty

Editor's Note: Turns out this person is actually related to THE REAL Miss Betty.  Documents were found and sent to Tom ...Too Weird!!